The ultimate guide to Ibiza – Clubs

The ultimate guide to Ibiza – Clubs

Ibiza has been an iconic destination for the dance music scene for decades and has never even thought about slowing down. Though parties come and go, change and evolve, the magnetic draw to the White Isle for hedonists, revelers, bohemians, hippies and those just looking for a good time never seems to cease. The super clubs of Ibiza are voted as some of the best in the world and see millions of ravers through their doors every single summer, with weekly residencies that cannot be beaten anywhere around the globe.

Partying from day to night in an open-air venue – what’s not to fall in love with? This beacon of Playa D’en Bossa is not only a party venue, but a fully functioning hotel as well. Opening mid-afternoon every day in the height of Summer, Ushuaïa is one of only a few places on the island where you can day-time rave to the world’s biggest DJ’s.

A firm favourite with the worker crowd is Saturday party ANTS, which sees mega-stars such as Andrea Oliva, Steve Lawler and Joris Voorn take the decks on the specially built ANTS stage. Other residencies include David Guetta and Martin Garrix who always pull in the party crowds. Ushuaïa is also famed for its one-off events during the summer which in 2019 included global superstars Swedish House Mafia and Barcelona music and party brand elrow.

Owned by the aforementioned Ushuaïa entertainment, Hï had big shoes to fill after replacing what used to be the infamous Space Ibiza. Split into two main areas, the Theatre and Club Room, Hï’s 2017 modernization brought more of a show inside the iconic Playa D’en Bossa building. And who knew that hanging out in the toilets could be so fun?! 2019 saw some of the world’s best DJ’s grace the specially built DJ booth inside the unisex bathrooms (aptly named ‘The Wild Corner’) including Fat Boy Slim, Mr Doris and even Idris Elba!

The International Nightlife Association recognised Hï as the World’s Best Club of 2018, and it’s easy to see why. With incredible residencies from the likes of Black Coffee, Glitterbox and Camelphat in 2019, we can only see Hï’s popularity increasing in 2022.

Housed in an old airplane hangar surrounded by Ibiza’s salt flats, DC10 is the place to be for some of the most down to earth underground parties on the island. This iconic Ibiza club opened in 1999, and over the last 20 years has hosted some of the most talked about events, including one-offs with the likes of Carl Cox, weekly residency Circo Loco and in more recent years Paradise with Jamie Jones.

For a venue that only opens two nights a week, DC10 is firmly rooted into Ibizan clubbing culture. The experience of being right at the end of Ibiza’s airport runway is second to none, with planes flying just overhead whilst you’re chilling in the garden. The infamous opening and closing parties, attended by thousands and lasting more hours than are in a day are firmly written into its history books!

Once an open-air venue, Amnesia Ibiza has taken many different forms over the years but has always been a staple in the clubbing world. Now (unfortunately we think) fully covered, the two rooms of Amnesia host some of the most talked about parties of the summer season.

The 5000-capacity super club is home to incredible parties including Cocoon, Together, elrow and Music On, and has hosted the likes of Calvin Harris, Steve Aoki and Fat Boy Slim in past years. The eclectic mix of music styles ensures that everyone is catered for and the club is full to capacity every day of the week! There’s even a foam party for those inclined.

Officially the largest nightclub in the world with a 10,000-person capacity, Privilege’s beginnings as Ku saw an open-air venue with a swimming pool, multiple stages and possibly the most famous party ever to grace the earth – Manumission. There’s plenty of different levels of Privilege to explore, but the action is fully focused on the gigantic main room with its 25m ceiling and residencies such as Resistance and Supermartxe being the most popular throughout the summer.

The vista room is a sight to behold, especially at sunrise when the warm sun beams through the floor to ceiling glass walls onto the masses of dancing bodies, and the various chill out rooms and gardens are perfect for pacing yourself through a long night of partying.

The legend of Pacha outlives the majority of us, first opening its doors in the Summer of 1973. This once traditional finca in Ibiza Town is one of the islands oldest clubbing institutions and has an incredible reputation for adding VIP flair to the Ibiza clubbing scene.

2018 saw a massive upgrade of the club and after entering through the original courtyard of the traditional building, partygoers have the choice of multiple areas including the Main Room, Funky Room, Roof Terrace, Garden and Restaurant (which is conveniently right next door). The oldest club night in Ibiza.

Underground might be tucked away behind island giants Amnesia and Privilege, but this locals favourite is definitely worth looking out for. Cheap entry (which generally includes a drink) and events that aren’t overly promoted, Underground stays relatively unknown, with an intimate and in-the-know crowd, all there to simply have a good time.

Special one-off events bring the real noise to Underground Ibiza, and last year this included an all night long set from Sven Väth, another by Apollonia and a small series with tINI and the gang. Underground parties are extremely popular with locals and residents, so expect good vibes and even better music.

The new kid on the block in 2019, Octan opened its doors mid-season in the spot previously inhabited by Sankeys. They smartly kept it simple in their first summer, adding just a couple of parties each week to the Playa D’en Bossa line-up. Think minimalism and underground beats, barely-there VIP and a warehouse aesthetic – Octan is perfect for those looking for zero fuss events fully focused on the music.

Octans first summer included residencies from Apollonia with ‘Planet Claire’, and the classic Warriors sessions (lovingly brought back from Sankeys times) with Steve Lawler and guests. Though we didn’t get to fully experience an Octan Summer in 2019, we are definitely looking forward to a full 2022 season with this promising night club.

Remember the famous ‘Club Tropicana’ music video? Well, unfortunately now the drinks are not free, but the fun is still going strong at this iconic Ibiza venue. Pikes, previously in the hands of the incredible Tony Pike, is now part of the Ibiza Rocks family, under the control of Manumission curators Dawn & Andy, and is home to some of the most interesting, intimate and downright fun parties of the season.

The oversized disco ball in Freddy Mercury’s old bedroom, Sunny’s bathtub karaoke and boudoir, gold tiled bathrooms and surprises around every single corner – Pikes has been perfectly formed for those who are looking for a multi-sensory clubbing experience.

Starting off its legacy with illegal gigs at Bar M on the San Antonio promenade, Ibiza Rocks grew throughout the years into a live music venue within a San An hotel, giving us unforgettable concerts from the likes of The Artic Monkeys, The Killers, Biffy Clyro and The Kooks, all the way up until 2015, when the sound laws kicked in and live bands were out ☹

The Ibiza Rocks musical style has evolved since then, and in 2019 re-branded and became a purely day life venue. Weekly residencies from the likes of Craig David, DJ EZ, Rudimental and Jax Jones fill the pool and dancefloor in the center of the hotel through high season, and parties such as Cuckoo Land and MK’s Area 10 complete the lineup. The one-off Merky Festival by Stormzy was one of the biggest events from last year and the whole of 2019 was Ibiza Rocks’ strongest summer yet, so we can’t wait to see what 2022 holds for them.

This luxury venue in San Antonio is the perfect spot for bottle popping, insta-posing and seriously living your best life. Decedent pool parties fill the summer’s calendar, with music ranging from club classics and tropical house to Kisstory, all surrounding the venues 600m2 pool and dancefloor.

And if music wasn’t enough, O Beach excels itself with live performers, aerialists, musicians, dancers and bottle processions multiple times a day. So, book a VIP bed or cabana, fill up your insta-story and make all your friends at home jealous with a visit to O Beach.

An incredible venue, facing onto Playa D’en Bossa’s beach. It is known for its legendary parties across the summer throughout. With multiple events running each year, you and your friends will always have a variety to dive right into.

Bora Bora brings the beach club and restaurant vibes, with the music flowing through. It’s one to make sure you check out on your next visit over to Ibiza.

A party like no other on the island. Every Tuesday, join the underground movement. With resident DJ’s and special guests playing, every week it’s bringing the volume to the island. Everyone coming together to dance, it’s a party you shouldn’t be missing!

Since 2018, Secret Sessions has been making a name for itself on the island. Come see for yourself and we’ll see you this summer.

A once a week bottomless brunch, throughout the summer. Alongside a three course meal, what more could you want? Listen to a live band, whilst being with your mates and enjoy the Soul, Funk, Disco & House music getting everyone up and dancing.

With it being a sell out every week in summer 2021, keep an eye on our page for summer 2022 tickets that will soon be on sale!

Looking to plan your Ibiza trip and want the ultimate villa package with everything included? Send us a DM here and our team will help! 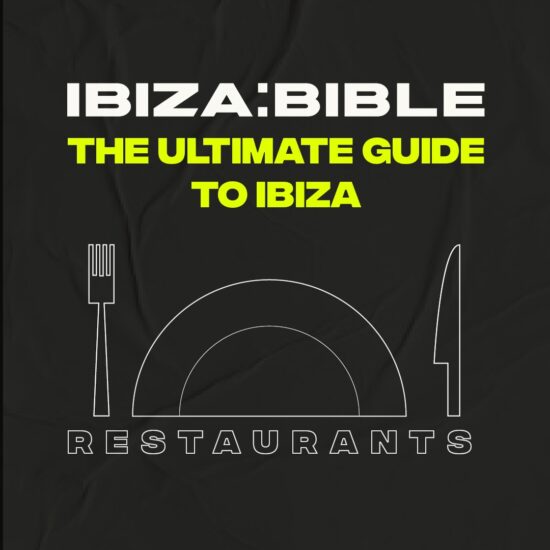 The ultimate guide to Ibiza - Restaurants